Bruce The Blog
Beyond Broadway

Dedicated to the memory of Joe Albert Lima, longtime WCT playwright/director/actor, who passed away in 2020. Mr. Lima was scheduled to direct the show in 2020.

If there’s anybody more antsy than theater-goers about the return of live, in-person performances, it’s theater-makers.

That’s a post-pandemic stage we’re not quite at, but we can take hope and heart that it’s getting so close now, we almost can feel “the roar of the greasepaint, the smell of the crowd,” to invoke a memorable Broadway musical title from singular talent Anthony Newley.

To paraphrase a signature song co-written by Mr. Newley for that show, until the proverbial curtain again rises to reveal actors in the flesh, “Who can we turn to?”

Torian Brackett delivers a passionate take on the emotional contradictions of marriage in Pat O’Neill’s claustrophobic “The View from My Room.” Photo credit: Melissa Nocera.

The answer is resourceful, community-centered theater companies like Westchester Collaborative Theatre (WCT; Ossining, N.Y.)  and Axial Theatre (Pleasantville, N.Y.). Of course, in these days of Zooming in to take in a performative work, geographic locations are of no moment. A more apt description in the prevailing climate of physical long-distancing might be to dislocate those theater troupes in a place named Virtual, N.Y. — or, better yet, for the sake of specificity, Zoom, U.S.A.

That’s where a lot of theater has repaired to these days, in lieu of the black box or proscenium. Theater scenes may be viewed on a video streaming service like YouTube, but in many cases, it’s being produced via Zoom.  (See separate musings on the formidable challenges of “Zoom theater” at the end of this article.)

MARCH MADNESS
Axial’s one-act festival, themed March Madness (which I have not yet viewed as I write this), premiered Friday, March 19 with the first of two flights of short plays, totaling 13 pieces. Program A runs through Thursday, March 25 with seven pieces. Program B runs March 26-April 1. Each $20 ticket entitles the purchaser to watch all 13 shows. For more information, go to Axial’s website. March Madness is co-produced by Axial Artistic Director Catherine Banks and by Virginia Reynolds.

Axial has for years mounted every February a very popular one-act festival (live on stage) under the tantalizing title Twisted Valentines. Extenuating circumstances this year caused the show to move online and to move back a month, with an appropriate re-branding.

With its Living Art Event, Westchester Collaborative Theater took on an ambitious re-imagining of an already ambitious project it produces every year. The current 2021 production brings to fore the same short plays that were selected for presentation a year ago, before being pandemic-stricken.

FROM GALLERY TO PAGE TO STAGE
Nineteen artworks by members of Ossining Arts Council (OAC) on exhibit at Ossining Public Library were viewed by WCT playwrights who could choose one from which to draw inspiration for a short play. The plays are submitted for selection by a committee.

In the current video production, a docent appears onscreen before each play to comment on several of the art works. That’s a nice touch, though it could be clearer which of the works inspired the play that follows. It’s ostensibly the last work mentioned before the play begins, but that correlation is not explicitly stated. 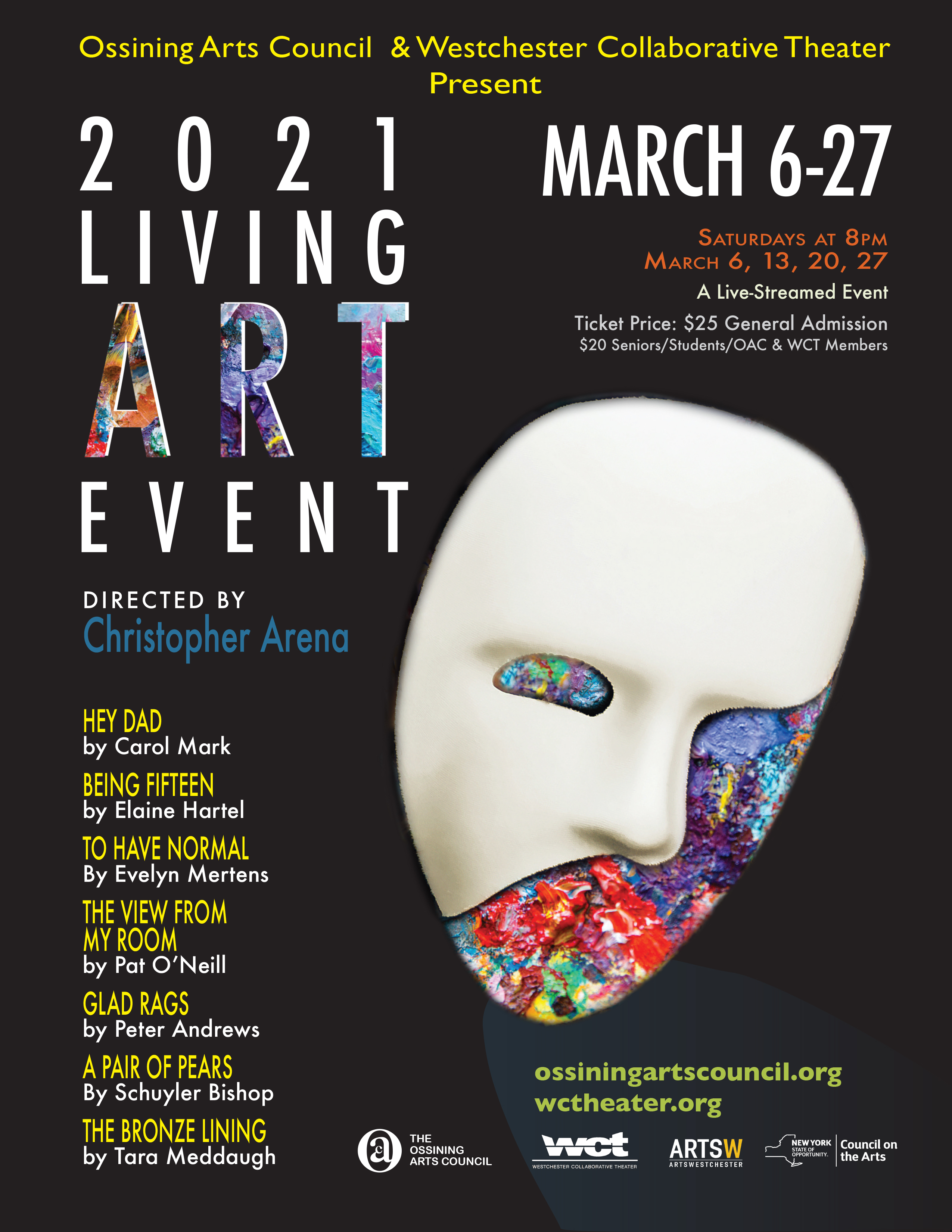 The WCT selection committee did a commendable job of curating a varied mix of material.

The Living Art Event opens and ends with a pair of whimsical pieces. Schuyler Bishop’s “A Pair of Pears” (Roberta Robinson, Michael Meth) extracts some sweet juice from a couple sparring over the sensuality of fruit. Peter Andrews’s “Glad Rags” has fun pitting stylistically polar art foundation doyennes (Roberta Robinson, Enid Breis) against each other, culminating in a colorfully choreographed, full-cast curtain call, Zoomified to the hilt.

In between, the other five pieces take a deep dive into fraught familial relationships.

In “The Bronze Lining,” Tara Meddaugh explores old wounds between two sisters (Amy Lowenthal, Lorraine Federico) who are catching up while hiking.

Elaine Hartel plumbs the labyrinth that is teen angst in “Being Fifteen,” featuring Joanna Fernandez and Ava Purcel as avatars of alienation from dysfunctional homes. Ms. Purcel’s authenticity and palpable sense of isolation makes a strong impression.

Torian Brackett’s passionate performance vividly captures the emotional complexity and contradictions of married life in Pat O’Neill’s effectively claustrophobic “The View from My Room.” In this case, Zoom adds value by virtue of a simulated trompe l’oeil backdrop that acts virtually as another character.

In Carol Mark’s outstanding “Hey, Dad,” Rob Ansbro turns in an affecting and chameleon-like trifecta as three characters. In addition to Joe, Jr., he voices an aunt and his deceased father, a veteran firefighter of larger-than-life stature.

This elegant jewel by the multi-talented Ms. Mark reminds us 1) monologues work better than two-handers on Zoom, and 2) solid storytelling in the hands of a pro combined with committed acting can overcome the diminution and disruption that technology like Zoom can wreak on dramatic cohesion and continuity.

What’s important are that creative catalysts like Westchester Collaborative Theater and Axial Theatre are not allowing the pandemic to stop them from giving theater artists a chance to make theater as we wait in the wings for the pandemic to end its run and go dark.

The Living Art Event is effectively directed by veteran director/actor/playwright Christopher Arena, whose task was made more daunting by the multiplicity of images to manage, a theatrical version of herding cats. It is co-produced by WCT Executive Director Alan Lutwin and WCT member and actor/director Melissa Nocera.

Axial Theatre has announced the line-up of short plays and monologues for March Madness, an all-virtual seasonal tribute to love and lovers.

The 13 original one-acts and monologues, presented as two separate bills of plays, will probe the depths of joy, despair and everything in-between that follows when Cupid’s arrows strike – or miss their mark.

The first bill of plays, collectively themed “It Takes Two, Baby” (Program A), debuts 8 pm on Friday, March 19, and will be available until March 26.

The second bill, themed “I’ve Gotta Be Me” (Program B), debuts 8 pm on Friday, March 26, and will be available for streaming through Thursday, April 1, 2021.

All tickets can be purchased at axialtheatre.org for $20, which entitles the ticket holder to watch all 13 plays on both of the bills.

The two bills (including continuous play dates) are …

Available for streaming March 19-25
“It Takes Two, Baby” (Program A)

I’ll Get the Wine
A married couple looking to spice up their love life turns to Oprah for some tips. By Carol Mark, directed by David Fritsch. Sara – Jaime Babbit, Jim – Chris McLaughlin.

Stiff Upper Lip
Is heaven what you make it? Do appearances count when you go to meet your maker? Walt and Wendy explore their options for the hereafter while still in the here and now. By James Balestrieri, directed by Virginia Reynolds. Wendy – Gail Greenstein, Walt – Jeff Schlotman, Padre – Michael E. Boyle, Jr.

The Other Other Man
A distraught husband accuses his neighbor of infidelity only to find they have something important in common. By Carol Mark, directed by Catherine Banks. Colin – David Cohen, Mike – Harry J. Copley.

Nothing Happened
Can a bruised couple survive a transgression – or will misdeeds and memories rule the day? By Evelyn Mertens, directed by Virginia Reynolds. Paul – Dan Walworth, Lexi – Marilyn Collazo.

Wasbian
Excerpt from the award-winning Off-Broadway solo show Wasbian, a shameless exploration of what it is to search for love — and sex. By Susan Ward, directed by Laura Gardner. Susan Ward.

Panty Wear
Leonard has a strange fetish. Once his girlfriend Jilly gets a whiff, she quickly noses around, following the scent to discover what stinks—or doesn’t! Written and directed by Wayne Paul Mattingly, co-directed by Quinn Warren. Leonard – Matt Austin, Jilly – Heather Haneman.

Nine Months Ago
An earnest and kind-hearted middle-aged man, looking for his soul mate and a family, is on a first date with an off-the-wall woman … who is very pregnant. By Nick DeSimone, directed by Lori Lowe. Mel – Mike Roche, Cynthia – Lucy Lavely, Waiter – Gary Geller.

Acushla
When love is love, it works in mysterious ways, and can last longer than a lifetime. Based on a true story. By Virginia Reynolds, directed by Rachel Jones. Virginia – Catherine Banks, Louise – Sandy Rooney.

Some Separate Musings on ‘Zoom Theater’

Zoom presents an assortment of challenges for theatrical presentation, not only for the creative teams, but for viewers (and reviewers), who need to adjust to a whole new dynamic to not judge the results by the conventional space and experience of live, in-person theater.

When two (or more) actors on Zoom are looking at their scene mate on screen, they are not looking in the direction of the other actor, as they would be on stage. The screen becomes their immediate audience, leaving the audience at home feeling like an unwelcome voyeur rather than a valued viewer.

Even the vernacular of the new technology is not always familiar to theater stalwarts. For its Living Art Event, WCT attaches the misnomer “live streamed.” It isn’t. It’s pre-recorded. “Live streamed” strictly describes a performance that is playing out in real time, as it is being viewed, like PBS’s Live from Lincoln Center or a sporting event telecast live.

Simply put, it is not fair to judge Zoom theater by the singular standards of in-the-room theater. One is chilled by cold technology, the other is sizzling with body heat. Still, it’s good to know what to expect, and adjust to that reality.

VIDEO: Watch TWO All-New Trailers for the IN THE HEIGHTS Movie!

Bruce “The Blog” Apar promotes local businesses, organizations, events and people through his boutique public relations agency APAR/PR. He also is an actor, a community volunteer, and a contributor to digital + print media covering the Hudson Valley. Follow him as Bruce The Blog on social media. Reach him at bruce@aparpr.co or 914.275.6887.