Bruce the Blog By Bruce Apar When Bruce The Blog Listens, People Talk

Turf is turf, whether it’s auld sod in the Emerald Isle or pavement in Manhattan; whether it’s an in-your-mug Irish lass sparring over a patch of land with the feisty farmer next door or American hooligans pounding the pavement to protect their territory from an Hispanic street gang.

Two such scenarios are playing out to magical effect on a couple of the finest stages of entertainment in the Hudson Valley. 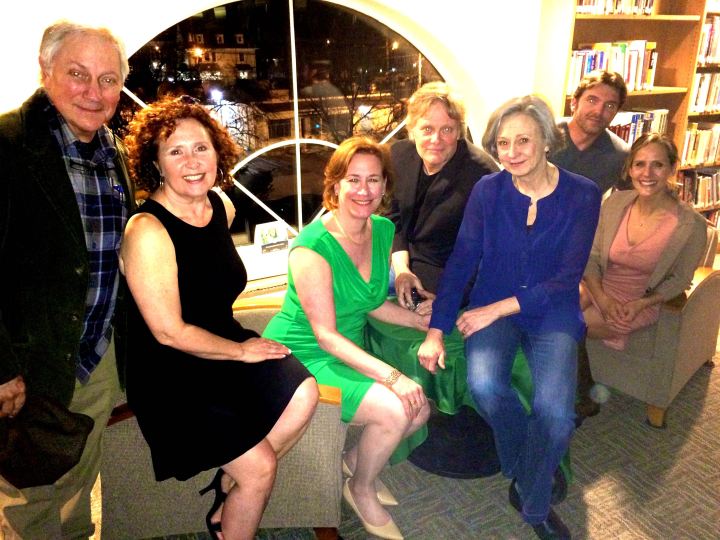 A few miles (or minutes) west, at Westchester Broadway Theatre in Elmsford, the Jets and Sharks are having at each other in the towering West Side Story, miraculously scored by Leonard Bernstein and Stephen Sondheim with a veritable hit parade of hummable and infectious standards.

There are many reasons to recommend Mr. Shanley’s big-hearted confection about life and love and, yes, death. Combine his lilting language and humanism with the unerring eye for quality productions of Hudson Stage, and it’s the luck of the audience to be in the theater.

This thoroughly entrancing entertainment is set in a remote Irish farming village, where four people from two neighboring families do nimble jigs, verbally and emotionally, in a folksy chess game.

We’re treated to pungent dialogue driven by raw emotions and twinkle-eyed insights into the human condition that are eminently relatable, like unrequited love and an alternating resignation and defiance dealing with the vicissitudes of life.

Holding up a mirror that causes us to reflect, laughing when we need to, is what outstanding playwrights do, and Mr. Shanley stands out as one of the best. 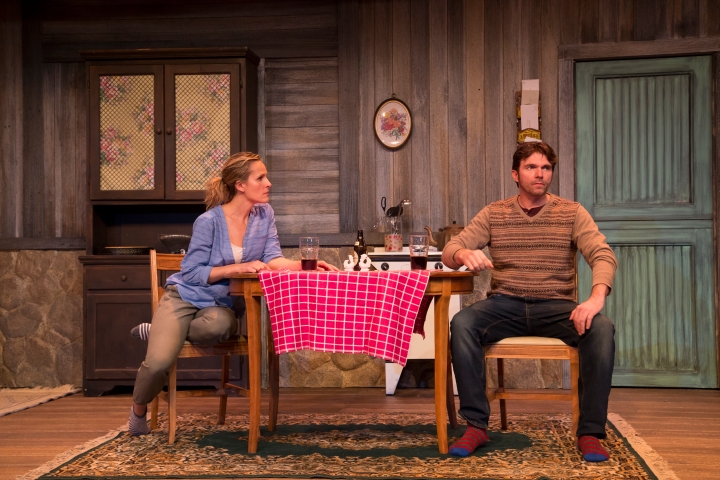 Susannah Schulman Rogers (left) as Rosemary Muldoon tries to get through to thick-skulled Anthony Reilly, played by Sean Hayden. Photos by Rana Faure

That much is clear from the very first scene, where the author’s wondrous way with words and organic humor hook the audience immediately.

Throughout, in fact, playgoers are committed fully to what is unraveling on stage, so much so that when a climactic moment is reached between two characters near the play’s end, audience approval is spontaneous and heartfelt, buoyed by collective relief. We are rooting for these people as if they were family.

Crusty son of the soil Tony Reilly (played to a pixie-ish fare thee well by Davis Hall). who lives outside the town of Mullingar, is getting his house in order, as he jokes about his impending demise, which he pegs at some two months hence.

As he makes abundantly clear with big-as-all-outdoors ardor, Tony intends not to pass along his acreage, a Reilly heirloom for 120 years, to son Anthony (the endearingly sullen Sean Hayden). Junior works hard the land but also is self-admittedly pixilated, or, as Anthony himself allows, “cracked.”

Meanwhile, next-door neighbors Aoife Muldoon (cool and carefree Susan Pellegrino) and tough-as-nails daughter Rosemary (fiery and foxy Susannah Schulman Rogers) are not about to give up a postage-stamp parcel they own (in Rosemary’s name) that separates the roiling Reillys from the road in front of their house, forcing them to pass through not one but two gates, an indignity that has dogged Tony for decades.

It also presents the practical dilemma of negotiating the sale of his land when it is saddled by orphaned turf he cannot transfer to the buyer.

Both 40ish Anthony and Rosemary, several years his junior, are single, so you can  imagine what’s in store for the audience where that lifelong, neighborly relationship is concerned. Except you can’t imagine. Mr. Shanley is not that pedestrian.

(from left) Susan Pellegrino (as Aoife Muldoon) and Susannah Schulman Rogers (as Rosemary Muldoon) give as good as they get in dealing with next-door neighbor Tony Reilly, played by Davis Hall. Photos by Rana Faure

“You think they’re going to get together at first,” director Dan Foster told me after the opening night performance, “but then you’re not sure.”

Indeed, there are surprises to be had both sad and serendipitous. Mr. Foster goes about his business with obvious discipline and sharp focus, delivering shows marked by pacing wound tight and acting that is energetic, confident and natural. Achieving all that is as hard to do as it is simple to say.

The director, who never had been to Ireland, said he traveled to Mullingar at the start of the rehearsal process to better understand its inhabitants and culture. “The Irish are not into self-pity,” says Dan Foster. “They are hardy with a great sense of irony that Shanley really captures in the play. Life can be hard, but along the way he’ll crack a joke.”

Anthony tells Rosemary, “People don’t appeal to me,” to which she replies, “Who likes people? Nobody.” Rest assured there’s a lot more where that hailed from.

In Mr. Shanley, there is more than the touch of the poet. There is the hand of everyman. Bon mots sail across the stage with the frolic of paper airplanes.

Will they or won’t they? Susannah Schulman Rogers as Rosemary Muldoon and Sean Hayden as Anthony Reilly waltz around each other, leaving the audience wondering whether they ever will see eye to eye to become a We. Photos by Rana Faure

As someone who has performed a few times on the Whippoorwill stage, at the opening curtain I was immediately struck by the consummate craftsmanship of the set design, which rendered the proscenium platform I knew almost unrecognizable.

The Hudson producers brought in a turntable, embedded in an elevated wood-slat platform sitting atop the permanent stage. The rather elaborate modification enables the set to be rotated during scene changes, enhancing the sense of place with elegance and authenticity.

In a matter of seconds, without a curtain closing or stagehands visible, we are transported, along with the performers, from the interior of the house to the front porch, complete with driving rain, courtesy of this region’s reigning lighting designer Andrew Gmoser.

Hudson Stage — in the persons of founding producers Denise Bessette, Olivia Sklar and Mr. Foster — has a well-earned reputation for putting on the classiest, most consistently entertaining theater in the lower Hudson Valley.

Everything they touch shines bright, right down to the Broadway-quality set design, and certainly the acting, which is never less than bravura. For ticket information: HudsonStage.com; (914) 271-2811.

The high-energy cast of West Side Story. Photo by John Vecchiolla

There are historic works that transformed the Broadway musical. Jerome Kern’s “Showboat” gave us Edna Ferber’s intelligent storyline that created a more meaningful context for the songs. Rodgers & Hammerstein’s “Oklahoma” gave us the balletic beauty of high-flying choreography.

Cameron Mackintosh’s and Andrew Lloyd Weber’s “Phantom of the Opera” gave us theme park spectacle imported from England. Then there’s “West Side Story,” which stands alone and, for this Broadway buff, atop all the rest. There never had been anything like it before its 1957 debut, and it’s unlikely there ever will be anything comparable.

It both set and broke its own mold in a singularly inspired stroke of genius. The convention-defying choreography and direction by Jerome Robbins not only made adolescent street gangs dancing on stage feel electrifying but, even more improbably, believable.

The storyline, by Arthur Laurents, is as old as Shakespeare, based on the familiar familial disdain between Romeo’s Montagues (read: Tony of Jets) and Juliet’s Capulets (read: Maria of Sharks).

The wide open, three-sided proscenium stage of Westchester Broadway Theatre is a distinct asset for this production. It offers multiple angles of action for the street scenes, where there is much milling about, as when the Rumble closes Act I, or for the luminously lit “Dance at the Gym.” 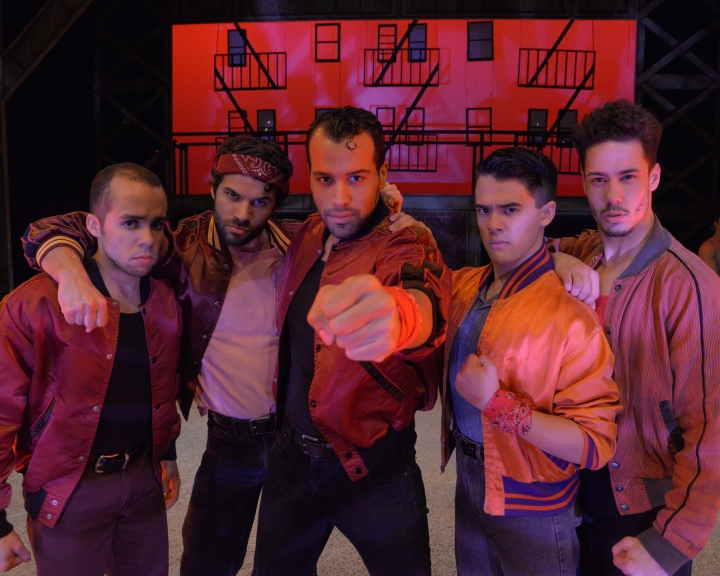 The expanse of the setting lends added poignance when Tony (robust-voiced Zach Timmer) and Maria (heavenly-sounding Carly Evans) sing the final notes of “Tonight” to each other from opposite ends of the stage.

Led by the Riff of Adam Soniak and the Bernardo of Brandon Contreras, the ensemble cast portraying Jets and Sharks sustain  the necessary energy that West Side Story demands of its interpreters. Also worthy of singling out is Xavier Reyes as Maria’s boyfriend Chino.

The Bernstein-Sondheim score arguably is the richest and most enduring in Broadway annals. It also is, musically, and having nothing at all to do with ethnicity, the most soulful.

Every song is iconic, from the clever playfulness of “America” and “Gee, Officer Krupke” to the youthful yearnings of “Maria” and the “I Feel Pretty” to the achingly beautiful “Somewhere” ballet and “I Have a Love,” Maria’s plaint to her sister Anita (Allison Thomas Lee).

“West Side Story” is nearing its 60th birthday, and yet every time you hear its touchstone numbers — starting with the instantly recognizable whistle that sparks the breathlessly-paced prologue, in place of an overture — it’s as if you’re hearing sounds of nature being created on the fly.

This music courses through our consciousness like blood through our veins.  That’s what makes “West Side Story” the apex of American popular art.

With musical direction by Ryan Edward Wise and direction and choreography by Barry McNabb, this production runs through July 5, 2015. For ticket information: BroadwayTheatre.com; (914) 592-2222. 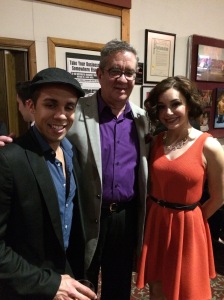 Xavier Reyes is Chino and Arianna Rosario is Rosalia in West Side Story. Bruce Apar is Bruce The Blog in Hudson Valley. Photo by Pia Haas

One thought on “The Art of Staging Turf Wars”